Remember those old TV shows with the spooky music, where a roll of the dice or a chance meeting determined the fate of the world.

What if Curly, Larry and Moe never met? No Three Stooges. What if Jackie hadn’t met JFK, no Camelot. What if you’d have turned left instead of right? You’d have never met your future spouse.

Or what if Joey Falzone hadn’t met Nick Parnello on some hill in some distant place?  There’d be no VietNow. No Vietnam Veterans Honor Society. No Supper Club at Base Camp: Maria’s. No LZ Peace Memorial. No help for thousands of Vietnam veterans battling PTSD and Agent Orange.

But luck and fate intervened and Joey and Nick met on a hill in Pleiku, Vietnam and the rest is history. Of course Joey and Nick didn’t do it all by themselves, but it was that chance meeting that started many things and changed many lives.

Joey Falzone, one of the founders of VietNow, the Vietnam veterans organization, died January 7, 2014 at his home in Cherry Valley, Illinois. Joey was 68 years old and was a Vietnam veteran having served in the Army. He was awarded the Purple Heart when he was wounded protecting U.S. helicopters that were under attack by the Viet Cong.

For over two years he battled health problems caused by exposure to Agent Orange while serving in the Vietnam War.

Joey was born May 5, 1945 the son of Joe and Norma Falzone. He attended Boylan High School and in 1964 married Patricia Kelly.

Legend has it that in 1969 Joe Falzone and Nick Parnello met on a hill near Pleiku, Vietnam and vowed to meet for dinner if and when they ever made it back home.”  Well, they did get back and this chance meeting of two soldiers from Rockford led to the formation of the VietNow veterans organization.

Vietnow grew from the charter chapter in Rockford, Illinois to over 40 chapters around the country. 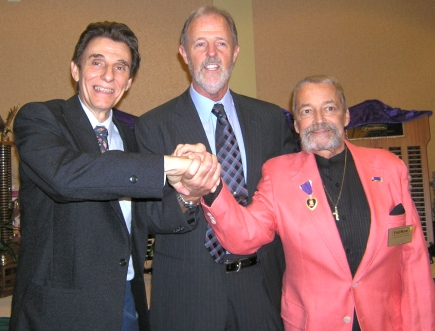 The Vietnam Veterans Honor Society is responsible for creating the LZ Peace Memorial at Midway Village Museuem in Rockford, Illinois.

Think about this for a minute.  If those two soldiers hadn’t met on that hill in Pleiku almost 50 years ago you wouldn’t be reading this because none of it would have happened.

VietNow wouldn’t have been created. The Heuy at LZ Peace Memorial would be somewhere else, and God only knows where.

In 1984 Bob Hope was here for the Rockford Pro/Am Golf Tournament and was the main entertainer for the Pro/Am at the MetroCentre.

For over 30 years Bob Hope entertained American troops overseas and he spent several Christmases in Vietnam. In 1965 Bob Hope did 22 shows and visited 5 hospitals in Vietnam.

When they found out Bob Hope was coming to town members of VietNow met with him at the MetroCentre. Rumor has it they even sang a song or two. It was truly a night to remember.

Now almost 30 years later Nick Parnello and Joey sing a tribute to Bob Hope and their memories of Vietnam. This was at the 2011 VietNow Convention in Lake Geneva.

The world’s a better place because of a young soldier named Joey Falzone. 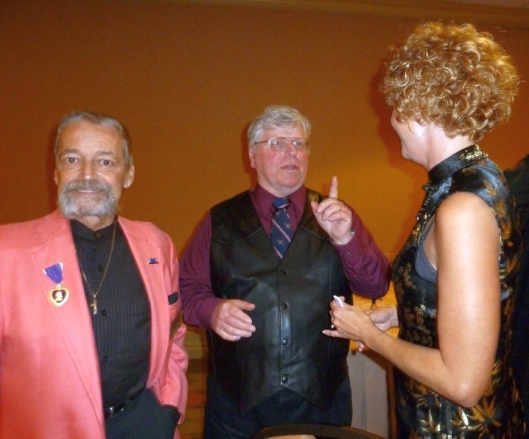 Joey, Darell Gilgan (VietNow officer) and Michelle Baugh. She was 3 months old in 1968 when her father, Richard Githens, was killed in Vietnam.

Link to WIFR tv station story with a video.

So, Joey, it’s not good bye, but “See you later.” because one day, in the blink of an eye, we’ll all meet again, on some hill, in some distant place.